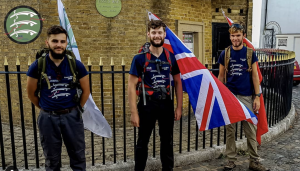 Own has completed two major fundraisers for Age Concern and raised a considerable amount of money. The first was a sponsored walk around the Isle of Arran in Scotland which involved camping in remote conditions losing his tent twice. The second fundraiser was walking the Essex Way with two friends.

Owen has set himself a target to raise £5,000 for Age Concern.