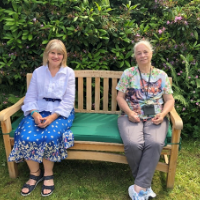 Lynda was already a full-time carer for one of Age Concern’s clients but was really struggling with her caring role. I’d spoken to Lynda on a couple of occasions and could sense she was feeling really low, so I asked if she’d consider having a befriender herself.

She was very hesitant at first and wanted time to think about it.

When I called back, Lynda agreed to give it a try and I knew immediately that I was going to match her with Jane.

Lynda had previously tried to find a group of like-minded people going through similar situations to herself to talk with. As she says she got talked in to befriending by me, Lynda didn’t feel she would be very good at talking on the phone as she prefers to gauge people’s reactions through face-to-face contact.

When Jane applied to volunteer, I already had Lynda in mind as I felt they would be an ideal befriending match.

A friend from The Colchester Blanketeers first mentioned volunteer befriending for Age Concern Colchester and North-East Essex, and Jane thought she was ready to try and support someone else. Jane had had someone listen to her and imagined that by volunteering she would be helping an older person who was perhaps housebound and lonely, and that she’d chat about knitting!

How wrong could she have been.

Jane almost gave up at the first hurdle as she encountered a few problems with technology, but Judith, her befriending co-ordinator, supported her through the DBS application and the online training and soon Julia was ready to be matched. She recalls that her first befriending call was completely different to her expectation.

From the outset, Lynda felt that Jane was on her side. She says:

‘It was lovely to talk to someone who had been through a similar experience to me, being able to share worries and concerns and get reassurance.’

Lynda now realises that she was desperate to speak to someone; she was at the end of her tether and believes that she would have had a breakdown if Jane hadn’t befriended her when she did.

Lynda says of her caring role:

This is the hardest job I’ve ever done; I feel like I’ve lost my identity. I’m not just a carer but a housekeeper, financier, cook, negotiator with the various NHS departments, pill-dispenser, and fixer of all the things that go wrong around the house.  Once my partner is in bed that is my time, and sometimes I don’t go to bed until the early hours. I do have help from family, but Covid stopped all that as we were in lockdown.  It was like Groundhog Day every day and I didn’t get a break for months

Both Jane and Lynda talk openly of their caring roles, how wearing it is, and how much their respective partners changed as a result of their illnesses.

The two women soon found they had a lot of things in common – not just their caring roles, but as children they both liked the same books, The Faraway Tree by Enid Blyton, being a favourite, a love of fairies and both do a lot of crafting, particularly for charities.

Jane says: ‘I felt an instant connection with a ‘caring lady’ and I could empathise with her current situation, that of isolation and feeling stuck.’

Over the weeks Lynda started to come out of herself, and Julia shared some of what had helped her, although she recognises everyone has different coping strategies.

‘I’ve always felt that sharing enables the other person to open up – I learned this at The Trinity Centre.’

Lynda says: ‘I’m so glad we’ve met each other; we seem to understand each other.’

Lynda and Jane have developed a real friendship, and both feel they can be themselves; it feels very natural to talk and open-up to one another. Jane believes the befriending has helped her as much as it has helped Lynda, and both look forward to their weekly calls and the occasional meet-up when Lynda is able to get some respite from her caring role.

At the end of the conversation Lynda summed-up:

‘I’ve got a lot to be positive about, I’ve got a home, my crafting, two cats and I’ve made a friend for life.’

Volunteering contributes to our wellbeing. It can help reduce anxiety and stress and assist with broader mental wellbeing too. Volunteering can help us cope better with illness. We feel more connected, less lonely and get a sense of satisfaction from doing something meaningful. We offer a wide range of roles to help you connect and make a difference.