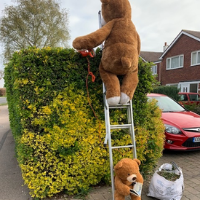 Meet Keith who has been volunteering for Age Concern Colchester and North-East Essex since the start of 2020. Diagnosed with Relapsing and Remitting Multiple Sclerosis 9 years ago, he had to give up his job as a Service-manager for British Gas because of the brain-fog and physical problems he was having.

At 49 he accepted Ill Health Retirement, but still wanted to do something to keep himself occupied so he signed up to do some volunteer driving at Community 360 in Colchester, which he has been doing for the last 6 years. He was able to get his blue badge through MSUK and uses his own car to take people in need shopping, to clubs and appointments.

Three years’ ago, Keith responded to a shout-out on Facebook asking for people to volunteer as carers but discovered that he was not suitable for that role, but then saw an advert for Befriending with Age Concern Colchester and North-East Essex.

A natural fit: I saw the advert and thought, I can do that as I already drive people in their later years around and talk with them on our journeys.

I was first matched with a man called Stuart whom I visited for 9 months. He had lost his wife 6 months previously and was very lonely with only his carer seeing him daily. He talked about his wife all the time and I listened realising that it was totally natural that he should want to do this.

It felt good to know that my visit was truly making his day; I could see the difference when I left him on a high.

Sadly, Stuart died during the early wave of Covid-19. I wanted to take on another person, preferring a man as it’s a more natural fit.

His face lights up when he sees me: Luckily, my current match is a 91-year-old man called Peter who was deaf and who can’t lip-read, so we use an app on an ipad for communication. He writes his responses and leads our conversations. I prompt him and we manage just fine.

I have been seeing him for a couple of years now, although not very much during the lockdowns as the telephone doesn’t really work for him. Fortunately, his wife and granddaughter stepped into the breach more during this time but now I can see him again, it’s great. His face lights up when he sees me. Whilst his deafness is a difficulty, it’s not a complete barrier as we have a lot in common.

Peter’s father was a thatcher which led him into the building trade himself as he used to help him. He does tend to tell me the same stories each time I’m there, but it doesn’t matter because I am interested, having both grown up in the same village where he now lives, just outside Colchester. He tells me about the local aerodrome and how he would watch the American pilots during the war who on landing would hold up the number of fingers which indicated how many planes they had shot down. As boys, Peter and his friends would roam all over the planes, fascinated as they were with the lives these pilots led.

I am currently in touch with a small local museum which has records about the aerodrome which I know will interest Peter. Hopefully I will be able to get someone to come out and talk to him about them.

Therapuetic: For me, I find it therapeutic talking to people and am a fan of the Talking/friendship benches which have begun to spring up. I love being able to get out and about with purpose. When I was first diagnosed with MS, my neurologist suggested googling to find some support groups; I found the MS Resource centre head office at The Hythe in Colchester. Here I was able to get advice on PIPs, Motability, help and guidance along with some talking groups. I now run a regular coffee morning there and my life has changed for the better as I now look forward to getting up for chats with people.

During Lockdown restrictions, like everyone else, I was only going out once a day when on one occasion I was cutting the front lawn and left the mower whilst I went inside for a cup of tea. Whilst in the house, I thought it would be funny to hunt down my daughter’s old favourite 5-foot teddy bear and prop him up next to the mower as if he were cutting the lawn.

Whilst I got on with the weeding, it became apparent that my neighbours were really enjoying the Teddy-Bear Still-Life. Encouraged, I started setting up a new Still-life each day.

This continued for 66 days.

With each new day came a new pose and a new theme.

I loved positioning the bear in different ways and posting them on Facebook and the local West Bergholt news.

Momentum gathered and soon people were actively looking for the posts at various points to see what the bears were doing to celebrate: VE Day, Eurovision, England cricket, Wimbledon, Golf Masters – they even went off on the holidays which the rest of us could only dream of…

By now I had added a smaller bear so the duo had more scope in their antics, they became BT engineers, zip-wire athletes and even topiary-experts…

The Bear man of West Bergholt: All of this activity attracted the attention of BBC Essex’s Steve Scrutton, who lives in the village, which in turn led to a Radio One interview with DJ Chris Moyles, Radio Two’s Jeremy Vine and finally BBC1’s The One Show.

People began to travel from nearby town and villages to visit the bears, despite me trying to keep it local to discourage people from making the unnecessary journeys we were all warned not to make. But people still found their way to my front garden. A local taxi firm asked if they could park their taxi on my drive and to have the bears breaking in, this gave me an idea as to how I could bring it all to an end…

I did this by placing the bears in the taxi and leaving for Colchester Zoo which was re-opening the next day. I then took a picture of them arriving at the zoo and put both pictures together with captions.

From here, I decided to make a book with all the photos and witty captions which amazingly took off selling 900 copies. I receive letters and emails to The Bear man of Bergholt from people all over the world who have been following the bears’ antics. Book two was released just before Christmas and included the bears visiting small businesses which contacted me. The sale of these was delayed until February/March time but are steadily selling.

I now have a blue plaque on his house, generously given to him from the Parish and my bears became the subject of a local school’s writing-competition about what they got up to over Lockdown and what to name them…Eddie-the-teddy (Giant bear) and Geni-the-teeny (smaller bear.)

Both bears made an appearance at the West Bergholt fete at the end of June and have raised over £8,000 for Colchester Zoo and MS UK.

I guess I am now and volunteer fundraiser as well as being The Bear-man of Bergholt!

Volunteering contributes to our wellbeing. It can help reduce anxiety and stress and assist with broader mental wellbeing too. Volunteering can help us cope better with illness. We feel more connected, less lonely and get a sense of satisfaction from doing something meaningful. We offer a wide range of roles to help you connect and make a difference.

2 thoughts on “Volunteering Stories: Keith’s Story (aka: The Bearman of Bergholt)”