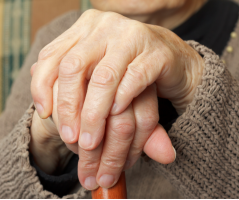 It’s important to stress that no two sets of experiences of grief are the same. As we are all unique, the same can be said for the emotional journey of the individual during bereavement. Grief can take many forms and isn’t just about a good cry or a prolonged period of sadness. Much can be said on such a complicated topic but for now, we are focusing on how a man in later years experiences loss through bereavement.

One of the many stereotypical images attributed to men across time is that of showing strength in the face of challenge or stress. Of course, at our point in the 21st century many of us know that this assumption is no longer considered trustworthy to say the least – however, in times of grief, attempting to appear indomitable to the outside world could leave certain men in later years particularly vulnerable. To appreciate how men might experience their emotions during this time may indicate to those from their support network (family and friends) how best they can help them cope after a big loss.

Because some men hide their grief, watch out for a hybrid of other symptoms manifesting over a period of time: withdrawal from others, irritability, angry episodes, obsessional and intrusive thoughts possibly over death and substance abuse. Be aware none of these symptoms are gender specific and will be just as evident in some women too.

Men might process their grief negatively in the following ways:

1. Though it is sometimes hard for some men to share their feelings during the grieving process, being reminded that someone is there for them or thinking about them, a friend or member of the family who is willing to listen should they want to talk: this is the best way to support someone especially if they are inconsolable but try not to force anyone into discussion when they are not ready.

2. Join them in an activity with them which has nothing to do with the bereavement. This could be anything from doing an outside pursuit such as a long walk or learning something new together. That way they are more likely to open up and discuss their recent loss along the way but you can more sure if they do broach the topic, it will because they feel safe to do so.

3. To avoid a lengthened period of time where complications such as chronic depression and more serious mental health issues evolve, some men are aware that distraction can be a great way to manage the gap left by a loved one. Though distraction is one way of dealing with the grief process, just by avoiding thinking about them altogether does not rule out significant mental heath issues manifesting in this way. You can encourage projects that may help remember a loved one who has passed in a positive way to celebrate their life. Many DIY tasks that are more hands on will do much to help heal through physical distraction achieving a worthwhile goal.

Remember to use empathy and compassion as we are all unique and although some experiences in loss and bereavement may be similar, they are never an exact copy.