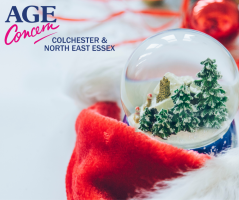 In the run up to Christmas along with the usual cold weather and flu, Essex is likely to encounter an increased risk of loneliness amongst the later years community encountering tough circumstances throughout the winter months due to the lingering threat of COVID_19 especially on our most vulnerable.

Those living on their own, some cut off from their family due to ongoing restrictions, may well be feeling the pinch right now whether it be from financial, physical or mental health issues also where communication and connection might mean the difference between the ability to cope and the following situations:

-dying from cold due to fuel poverty

-coping alone as a carer with a partner who has dementia

-enduring heart break from bereavement without another soul to talk to

So if one can practise the two biggies: kindness and awareness during the winter months, there might be less likelihood for someone else in later years to suffer in silence particularly when support could only be as far as next door

While people say that kindness can slow down the ageing process, there is much to contemplate by undertaking kind deeds towards those in later years acting towards strangers like the families and friends who have supported us through the good and bad times with the same unconditional devotion.

Please check out a myriad of volunteer opportunities at Age concern Colchester & NE Essex ranging from Emotional Support to Befriending, in the hope we can scaffold our later years community against unbearable hardship.