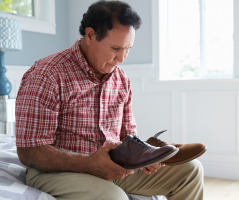 Vision impairment is not a symptom that is often associated with Alzheimer’s Disease as people tend to focus on memory loss when describing the most apparent manifestations of the condition. These visual issues are not to be confused with hallucinations but can be just as disorientating to those who have them. With normal eyesight, we would understand how everyday objects could be blocking our view such as holding a hand up to the eye but to someone with PCA, this will not be as obvious.

“Posterior” means the back part of the brain

“Cortical” means the thinking outer layer of the brain

“Atrophy” means shrinkage of that area of the brain

Those with Alzheimer’s could be confused by the optical signals coming from the direction of sight from any one source, the pattern jumbled up before reaching the retina of the eye. Therefore, the brain will either block these messages or not process them altogether, so the subject is less likely to understand them. Though the manifestation of PCA may be less obvious than the devastating memory and cognition loss from Alzheimer’s and might also begin at a younger age, it is worth considering as one of the possible causes of the more challenging behaviours in an Alzheimer’s patient. Some could have Dementia in later years and develop these symptoms over time but more research is needed as to how significant this is.

Caregivers should watch and listen for concerns about any, or all, of the following which could be connected with PCA: