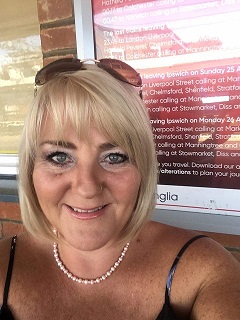 Christine joins Age Concern Colchester & North East Essex as Dementia Team Leader, for our new campaign in raising dementia awareness in Tendring. Christine brings a wealth of skill and experience in Dementia. Having previously worked for Alzheimer’s Society, she delivered face to face support for anyone affected by Dementia in various settings.

She is trained to deliver Dementia Friends Sessions, Carers Information Programs, and courses for people with Dementia to live well. Prior to this Christine worked for Tendring District Council, in their Older Persons Support Team. Christine has a passion to change lives for the better, for those who are living with Dementia, or who are affected by Dementia and achieving Dementia Friendly Communities across North, East and West Tendring.

Christine is also the co-chair of the Tendering Dementia Action Alliance working to co-ordinate approaches to Dementia over the Tendring peninsula: https://www.ageconcerncolchester.org.uk/dementia-support-in-ne-essex/

Christine is also keen to raise awareness across the following areas to lessen unnecessary suffering of service users across NE Essex:

Christine recommends investigating Dementia Friends Charity who aim to help as many people with Dementia as possible with their families and carers.

Investigate how to become a Dementia Friend. After filling a form you will be able to watch a short video focusing on the experiences of three people living with dementia.

“A Dementia Friend is somebody that learns about dementia so they can help their community.

Too many people affected by dementia feel that society fails to understand the condition they live with. Dementia Friends help by raising awareness and understanding, so that people living with dementia can continue to live in the way they want.”