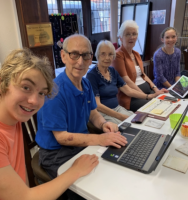 A Legacy isn’t just something one leaves behind at the end of life; it is an investment for the future which can be created at any time from cradle to grave. With so many youngsters around NE Essex ready and willing to make a difference now, some may think why the wait! Imagine a future turbo charged with possibility throughout your community. Young People are eager to invest their time to preserve a brighter future for us all. Right now, they are collaborating on all kinds of projects like befriending the vulnerable, engaging in positive thinking and fundraising for good causes.

Sometimes what the media say about young people can be a little bit negative, but at Age Concern we find that often the reverse is true. There are all kinds members of our community who are supporting the older generations from a variety of backgrounds, including those who happen to be as young as 5 years and under. Age Concern currently has been nominated in two projects ongoing at the moment which we hope indicates the shining examples young people can set for the rest of us:

Much can be learned from integrating age groups together doing activities and tasks in tandem. A combination of the elderly and the very young can come together in a social setting learning to combat loneliness together, dementia and all manner of other wellbeing challenges people in later years might experience.  We hope to welcome an increasing number to volunteer on the Veranda hub in the near future.

After canvassing the Colchester community, Age Concern set in motion a newly integrated Friday Afternoon sessions on the Veranda hub entitled ‘A Natter with Nanas’ extending our theme connecting the young with senior citizens through connection and play. The parents of New-born babies, toddlers and children up to 5 years are invited to bring them along to the Veranda hub during a weekday afternoon where they are encouraged to pick some favourite toys and puzzles to accompany them so that the children are occupied. We find many of the toddlers are happy to mix with our Veranda members from Knit & Natter or with any other friendship groups running at the same time.

Nursery and reception children have had a profound impact on the older generation when brought into contact with them for a length of time because they tend to have a habit of bringing out the best in the most vulnerable as has been observed when both groups are together. Members of the older community have acknowledged the therapeutic effect on them as they spend time with the very young, spending quality time which can only be described by smiles and laughter. Studies show an increase in their physical wellbeing too, with greater confidence in doing tasks so that they feel more positive about themselves, an example of legacy long after the children have left the building.

If demand allows, Age Concern are proposing to extend the scheme as far as Wivenhoe or maybe provide a befriending scheme for lonely parents with very young children visiting some of our local elderly residents. So watch this space!