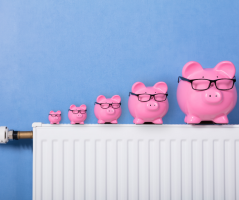 Fuel Poverty: During the winter months it’s important to keep as warm as possible. However, we do recognise that in later years this can be a major concern especially at times when energy costs are rising and where the cheapest option is not entirely obvious. A proportion of elderly residents across the county are at risk of turning their heating down or off, often compelled to make a stark choice between heating or eating while for many succumbing to the consequences of fuel poverty throughout the winter months. There are a number of issues arising from living with inadequate heating which given the right access to support, can be avoided altogether.

Physical Health: The ageing process demonstrates it is more likely that living within an inadequately heated house for any length of time will have a negative impact on a person’s general wellbeing. For someone younger the cold might well be endured, but an elderly person’s immune system will not cope as well when temperatures drop. Previously existing cardiovascular and respiratory conditions could be exacerbated during a cold snap. Similarly, for some, the ageing process heralds a reduction in body mass also others with poorer circulation. Unfortunately, it will be a struggle to keep warm compared to normal which may well lead to a more serious medical condition if the problem isn’t addressed at source. For our most vulnerable senior citizens, ignoring the risk of Flu can be fatal whereas someone much younger will be expected to recover. It’s a sobering thought that by living constantly within a cold house in later years, it is 3 times more likely to lead to a serious illness, also that 1 person is dying every 7 minutes within a cold environment, which statistically can and must be avoided.

Mental Health: As it is harder to get about in the colder temperatures for someone with mobility problems or Arthritis, life can get very stressful. As a result, household chores tend to be much more difficult to accomplish without help. If the house is too cold, then lifestyle choices could change behaviour, for instance going to bed earlier than usual or through restricting daylight hours by living in one room only to save money, which seems a miserable prospect for someone being used to independence and freedom throughout their life.

Awareness: The recommendation is that 18 degrees centigrade is the most comfortable ambient temperature for a house. This depends on a number of factors which the experts have admitted are hard to measure exactly but nevertheless they should be taken into account when assessing fuel poverty in any one household:

As we are concerned here with the fastest growing age demographic of our time we understand that loneliness and poverty are key contributors to poor physical and mental health and fuel poverty will increase the likeliness of someone vulnerable needing support during the coming years.

2 thoughts on “The Scourge of Fuel Poverty”