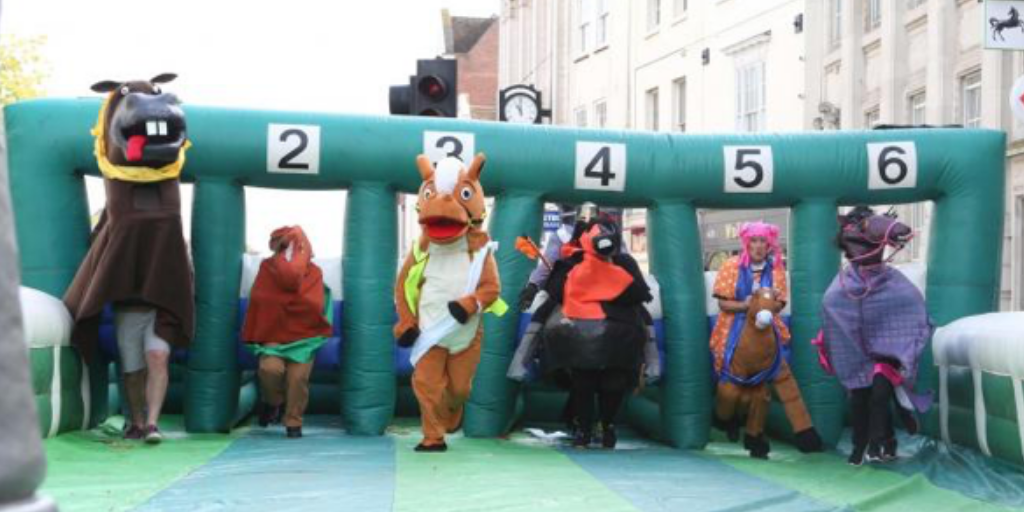 It’s not every day you see a group of pantomime horses racing down Colchester High Street! But that’s what will be happening on August 26th, Bank Holiday Monday, when local charities and organisations pitch themselves against each other during a family fun day organised by Age Concern.

“Our Panto Horse Derby Day has become a firm favourite on the town’s events calendar,” explained Simon Prestney, the Chief Executive of Age Concern in Colchester and North East Essex.

“Not only is great fun to take part – and sure to bring team-mates together as the back end of the horse cosies up to the front end – but it’s also very funny to watch!”

Among those entering the Panto Horse Derby Day is one of Age Concern’s key benefactors, Colin Bennett, in a panto horse called ‘4 Rum’ which will be pulling a chariot to keep in the spirit of  Colchester’s roman history.

He said: “Unfortunately last year our chariot overturned and because I was at the back end of the horse, I didn’t realise what was going on behind my tail and we dragged it along for some way with everyone laughing at us.”

Around 30 horses are set to take part in this year’s event with 12 heats along the High Street, starting at 10.45am. The Mayor will start the first race (Mascots) at 11am. There will be prizes for the Best Dressed Horses. In total, the day is expected to raise more than £10,000 for charities.

Simon added: “Each team will be raising money for their own charity and some for Age Concern too, which will help fund the variety of services we offer, including advice, friendship clubs and befriending in Colchester and Tendring.

“I’d like to say a very big thank you to all those taking part and to the Rotary clubs in Colchester who help out at the event, providing marshalling and running activity stalls. Without them and all our volunteers and sponsors, we couldn’t provide the service we do.”

Also taking part is Cllr Mark Cory, who said: “The Age Concern panto horse race is becoming a big event for the town. I’ve decided to be the back end of the horse this year – probably what most people think is apt for most politicians!

“The Mayor asked for help in raising money for Age Concern and his other charities, so I thought I’d step up. They often say elections are a two-horse race; I hope our horse, the Mayor’s Mare, will win by a nose. It’s a fun, family event, so please do come and cheer along the races.”

The Mayor of Colchester, Cllr Nick Cope, said: “I am enormously grateful to Cllr Cory for taking part in this year’s race for Age Concern, one of my nominated charities as Mayor.

“Panto race day is the perfect occasion for people who love a bit of horseplay to help raise much-needed funds for Age Concern, which does such great work to boost the welfare and improve the quality of life for older people in the Colchester area.”

There will be activities all day until 3.30pm including rodeo bull riding, face painting, a scavenger hunt and art competition. There will also be beat the goalie, a giant dart board to kick a football at, singers, dancers and bands.