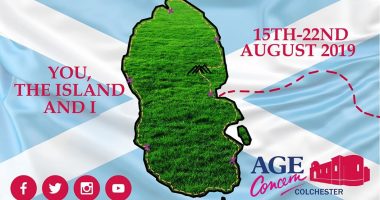 This day is mostly travelling from Colchester to Arran but I will stop along the way to show points of interest and give info on them.

Also the 15th is my A-Levels Resulys day so I should be receiving them as I get on the train, I’m super excited to see what I get and hopefully that will start the challenge off on a high note.

Once I get to Arran I will want to find somewhere adequate to sleep the night so I will most likely set up camp along the coastal path and cook some dinner , (the best thing being that I can eat nice food that night because once its eaten I don’t have to carry it) so I will have a propper feast that night in prep for the following days.

Although it is the second day of the challenge it is my first day of walking around the island.

This day is 18km including altitude gain and descent and should take exactly 4 hours of walking, this does not however take into account the fact that I will most likely be walking slower as i ascend Goatfell and also that i will probably want to stop along the way to take in the view and highlight a few features.

The first feature I will be covering and a large part of the day is reaching the summit of Goatfell, the weather is not looking great so this could be potentially very dangerous, so I will tread with care. I will also be highlighting Corrie and Sannox features such as the old jetty and standing stones.

I will then set down for the evening in Sannox and I imagine I will heavily reflect on the amazing adventure climbing to the top of Goatfell that day, I doubt the effects of loneliness will have kicked in by this point but I will not take that fir granted as I’m sure it will haunt me on the other side of the island.

Today we focus on the third day of the challenge. The stretch of walk between Sannox and Lochranza, this may end up being one of my favourite days because I am really looking forward to getting to Lochranza.

This day will be 13.3KM long and has will just be hand railing the north eastern coast of the island. Along the way I will make sure to highlight the dykes in Sannox, the abandoned cottage, the caves and Lochranza Castle and distillery.

This will be the only night I will have to stay in a campsite as the sheep in Lochranza are chances and I would not want to find one in my tent in the morning, so that is the only time throughout the entire challenge that the rules on wild camping must be lifted for safety purposes.

Today we are highlighting what to expect from the 4th day of the challenge, beginning at Lochranza and ending at Imichar Point. The day is 15.3KM in total and is primarily following the coast from the North down to the East of the island.

I will likely check out Lochranza Castle again today depending on the weather of the previous day, and will then proceed to the rubha and whitefarland burials. I hope to learn more about them on my travels but in the meantime they will make fantastic navigation waypoints.

Then as I get closer to Imichar the topography changes from jagged and sharp peaks to well rounded and smooth slopes, this due to glacial melt that occured after the ice age, as the melt migrated it eroded the peaks on the southern half making them seem less harsh relative to the North. I will present evidence of this on the challenge.

Then once I get to Imichar Point I will find somewhere suitable to pitch up for the night.

Today we are highlighting what you can expect from the 5th day of the challenge between Imichar Point and Blackwaterfoot.

This day bring with you it one of the amazing mysteries of the island, in Machrie Moor. Here there lies a sizable megalith of standing stones with various earthworks within proximity of the site. I will be spending alot of time taking photos of these and exploring them. Also along the coast is the kings cave and Hand beast footprints. If the weather conditions and tide are right I will attempt to find them, if not I will have to find an alternative route.

Further down the coast on this walk there is a large sill which has over time eroded to form a cliff face at Dune fort. Here there are standing stones and evidence of an ancient settlement that I will reveal.

As the day of walking draws to a close I will eventually find myself at Blackwaterfoot. Here I will be staying for the night so I will have to find somewhere adequate to pitch up for the night.

Beginning at Blackwaterfoot I follow the coast south to sliddery where I will attempt to find some more of the hand beast footprints, these footprints trail all along the coast to Kildonan so I will try to find them at various points along the way. Then I will also visit the small, picturesque village of lagg which has a stunning new distillery within it, the last time I saw @laggwhisky the distillery it was under construction so I am excited at the opportunity to investigate further.

From Lagg I then follow a path to meet the coast again and I follow the coast all the way to the magnificent Dykes of Kildonan. These igneous intrusions protrude into the sea making for a stunning photo, also I will take a look at Kildonan castle on the way back.

Then on the final stretch back north to Whiting bay I will visit the Giants Graves, which are mysterious large stone structures that folklore hints at being ancient Graves of giants , potentially evidence of primitive civilisation among Gigantapithicus in North West Europe, there is no evidence of bones however so the site is a mystery. As the sun descends over the topography I will then pitch up in Whiting bay for the night.

Today we are focussing on the 7th and second-to-last day of the challenge between Whiting bay and Brodick. This was originally going to be the last day with me jumping straight on a ferry in Brodick then a train to colchester, but I needed an insurance day should anything happen on my way around the island. So I complete the walk on the 7th day. But I don’t actually complete the challenge until I get back on the ferry the next morning.

The very nature of this means that I can explore Brodicks foods , bars and attractions without the limitations of the walk on the 7th evening and 8th morning.

So during this day I will be walking through Lamlash, the most populated area on the island. From which I can explain the Holy island sill off the coast.

Once I get to @brodickcastle the walk has officially finished but the challenge has not, this means I am out of the conditions of the challenge. So I will be enjoying the @arranicecream and speaking to as many people as possible.

If you are on the island and would like to pop by and say hello this is the time to do so, I would really love that after the walk so do let me know.

Then I will be camping the night in Brodick.

Today we are focussing on the 8th and final day of the challenge , this day is a more relaxed but I imagine a quite stressful day later on too.

On the last day I will be spending the morning in Brodick and then getting the ferry to Ardrossan, and then the train back to Colchester.

After walking all that way the nature of the UK rail network I’m sure will be the most challenging part of this 8 day expedition.