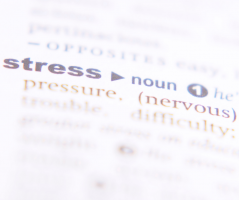 Stress is one of a number of many challenges we could all do without as the years pass. For the older generation, the pressures of life will manifest differently from someone who is much younger. For instance, there is a link between the changes in sleep patterns encountered later in life and an increased presence of the stress hormones existing in the front of the brain from lack of quality sleep. As an ageing body is less tolerant to stress, the recovery times from illness and injury is much longer than usual. Similarly, stress adversely affects normal cognitive functioning with subsequent difficulties in short term memory which could gradually occur over time.

One of the major causes of stress exists through constant worry about the gradual loss of independence over time. Anxiety can exacerbate the body’s stress response to life’s challenges due to mental and physical health issues brought on by sudden change like moving home or bereavement.

-Although driving a car is certainly possible over the age of 70, mobility issues could mount up slowly. With age, it is not easy to tell when to stop especially if the skills necessary to drive safely are less easy to manage. Being chauffeured around and travelling on public transport may represent a viable alternative but there is a perception that relying on them means loosing control by increasing dependency on others to get about.

-Retired folk often divulge they are worried about being forced from their home into an institutionalised setting long before they are ready to leave. Care home facilities can be quite costly these days, so making ends meet financially and the ability to spend money independently will be another major cause of anxiety in later years.

-An independent way of living requires cleaning oneself, to prepare meals, also the freedom to travel short distances without requiring close supervision. It is reported that frustration and lack of confidence in old age will threaten mental health depending on the individual who may feel they cannot cope from day to day. Finally, some of us will need to be extra vigilant to avoid falling while moving about the house. Being fully alert to dangerous obstacles, the fear of having an accident does result in tiredness and perhaps after a particularly bad fall, a reluctance to do as much as before.

Search our Blog for related topics:

One thought on “Stress and Independant Living”